You are currently in preview mode.

***Please note our temporary office hours are
Monday - Friday 9am - 3pm******
We are also available by email, text or appointment.

CARRIE AND JAY EWALD ENJOYED THEIR HONEYMOON IN TAHITI 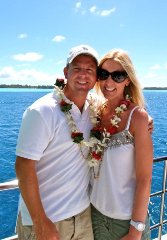 VISITING MOOREA AND BORA BORA ON THEIR SPECIAL HONEYMOON TO REMEMBER!

The trip was fantastic - such a beautiful place.  Nice and relaxing :)

All the hotels were good.  We liked both Moorea and Bora Bora!!!  but we did Bora Bora a little more -- we thought it was so beautiful and we have no problem just relaxing in the sun.  Moorea seemed to offer more things to do, so someone who doesn't like to sit still would probably prefer it there more.  We met some people that stayed at all the same places and they preferred Moorea because of the 4 wheeling etc etc.  We were only there a full day on Thursday and it must be like their Sunday because there was only 2 excursions available and they were all booked up already.  We ended up going waterskiing though.

In Bora Bora we obviously went snorkeling (Jay has HD video of sting rays he chased around haha) we went jet skiing, shopping, couples massage, polynesian dance show... We did a lot of relaxing and watching movies haha - we watched EVERY single movie we brought since my French wasn't up to date anymore!!  I would suggest to people to always pack lots of movies!! that was a life saver.  We went to both restaurants a bunch of times with our new friends from Santa Barbara and Chicago :)  Went to Bloody Mary's.  It was a blast

The Kardashians were there in May I believe but what an exciting thing to come home to!!! they played the first episode the weekend we came home so we have watched them all.  It's so weird watching EVERYTHING we just DID ourselves!!!! hahaha 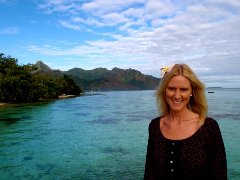 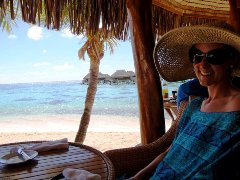 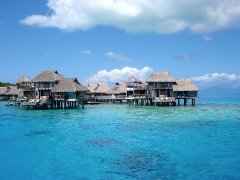 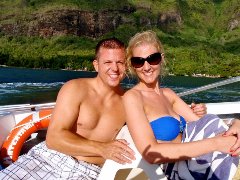 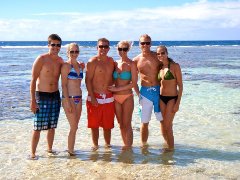 Boat ride to Bora Bora
Big Huts where the Kardasians stayed
Jay & I at sunset - you can see the big hut in the background - that's how close we were... maybe 5 huts??
2 Sailing pics
Our "group" Jet Skiing and at Bloody Mary's
Jay up by the chapel/spa area

Thanks again for all your help Gayle!!
Carrie and Jay Ewald